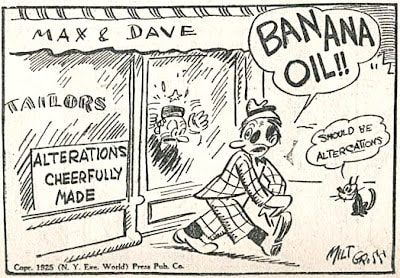 1925 cartoon about "banana oil" (here used to allege a false or misleading advertising claim).
HOAX:   "To deceive by an amusing or mischievous fabrication or fiction; to play upon the credulity of."  -- Oxford English Dictionary

The word "hoax" comes from the 17th century term, Hocus Pocus, by the English prelate John Tillotson to describe a juggler or magician who, "at the playing of every Trick...used to say, Hocus pocus, tontus tabantus, vade celeriter jubeo, a dark composure of words, to blinde the eyes of the beholders, to make his Trick pass the more currantly without discovery."

In like fashion, we believe, the Clean Meat lobby today is engaged in a "dark composure of words" that has obscured rather than illuminated the true nature of the meat economy.  We are not saying that the proponents of Clean Meat are intentionally engaged in fraud.  However, we do believe that they "play upon the credulity" of the public whenever they greenwash corporate agribusiness, describe meat as a natural and essential part of human life and diet, or represent cellular meat--rather than veganism--as the best or even the only available solution to the problems of animal agriculture.

Like the magician who uses misdirection and sleight of hand to obscure some secret action, the Clean Meat lobby uses marketing and rhetoric to draw public attention away from animal suffering and animal ethics, and to a new form of corporate consumerism which, in the end, may not end animal agriculture at all, but which may only create the impression of making a decisive positive change on behalf of the animals.

What's Up with that Banana, Anyway?

In truth (our graphic designer confessed to us!), the image for the home page of this website, depicting a banana mysteriously poised on a ledge, was arrived at largely through serendipity (the photograph was found in the public domain) and intuition ("it looked neat").  However, we've come to like our banana, and we think it suits our themes well:

- "Banana oil" is slang for "hokum" or "malarkey":  as in "the pure banana oil of the propagandist" (Hesketh Pearson, Webster's Third New International Dictionary).

- A banana peel is of course the universal symbol of a pratfall or accident about to happen:  a sign of the negligence both of the banana-eater (who thoughtlessly leaves the peel on the ground, where someone could slip on it), and the pedestrian (who is not watching where she or he is going).  By the same token, the Clean Meat lobby is heedlessly plunging forward--without carefully considering the ethical, economic, or political implications of promoting cellular meat technology.

- Before it became a clothing chain, banana republic meant "a small country usu. in the tropics that is economically dependent on foreign capital and dominated by it" (Webster's Third New International Dictionary).  This seems like a pretty good metaphor for the dependency of Clean Meat on venture capital, and its certain domination by capital.

- In Samuel Beckett's bleak existential comedy, Krapp's Last Tape, bananas are used to symbolize the futility and absurdity of the titular character's life--and, by extension, the absurdity and futility of the human condition.  We find Clean Meat to be existentially bleak.

- Going bananas is an expression meaning, "going nuts" or "going overboard" about something.  We think Clean Meat proponents are going bananas for meat.

- Bananas are in some ways the opposite of "Clean Meat":  a perfect, nutritious, self-contained food, 100% non-animal, that doesn't require bio-vats or technologists in lab coats to manufacture.  Primates have been eating bananas for millions of years, and we think that's a pretty good thing.  In fact, we may go out and have one right now.