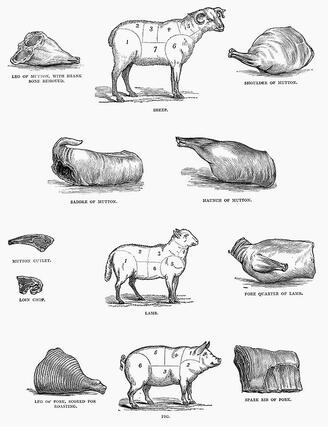 One of the key messages being conveyed to the public by the cellular or Clean Meat lobby is that, because humans are used to eating meat, they will always eat meat, and therefore must continue to be provided with meat--and not only tomorrow or the day after, but for all eternity.

The Cultured Decadence company, which is bioengineering products made from the cultured cells of marine animals, thus describes "traditional" seafood made from live animals this way:   "Seafood is a decadent, delicious, and nutritious source of protein recommended by doctors and dietitians as part of a healthy diet."  Aleph Foods, a new Israeli Clean Meat start-up, similarly aestheticizes animal flesh:  "At Aleph Farms, we believe meat is one of life’s pleasures, to be celebrated and enjoyed...."  To say that meat "is one of life's pleasures," and that it should be "celebrated," reinforces the myth that not eating animals is to deny oneself an essential good, without which life would be less enjoyable--perhaps even less meaningful.

As Stephen Eisenman of the Anthropocene Alliance notes:  "Promoters of fake meat are implicitly telling consumers that their appetite for meat must forever be gratified, regardless of the cost."  With such messages, the Clean Meat lobby may be locking us into a future in which humans remain as attached as they are today to the fraudulent belief that we can only thrive on the flesh of other animals--not only lab synthesized flesh, but flesh from actual living animals, as well.   As Justin Van Kleeck, of Triangle Chicken Advocates (an animal microsanctuary) observes:

"[Clean Meat creates] the categorical problem of keeping 'meat' as a concept on the human plate. As long as the culture of meat is not challenged--which cultured meat doesn't do--I don't believe that real, live animals will ever get off the plate either. The preponderance of meat very likely means that 'real' meat will always have a cultural cachet that alternatives--whether plant based or lab grown--will struggle mightily to overtake. Taste, smell, look, feel--all of these experiential aspects of our eating coexist with the recognition of what those foods are, where they come from, and how they are produced."

Consider this giddy July 2020 press release from the Good Food Institute, heaping praise on Kentucky Fried Chicken for beginning to market lab-grown chicken to the Russian market:  "'It's remarkable and inspiring to see KFC-Russia investing in new ways of making meat...KFC is synonymous with chicken, and so it is exciting to see the chain rethinking what chicken means.  As one of the most iconic restaurant brands in the world, when KFC talks, the worldwide meat industry listens. So we think this could be a game changer for the industry,' said Friedrich."[1]  Hidden in this discourse is enthusiasm for real chicken.  Not alternatives to chicken.

Strangely, the GFI's enthusiasm for cellular meats at times undermines its own advocacy for plant-based foods, too--as when GFI staff member Dara Homer, making the case for a high-tech foods revolution, writes:  "This doesn’t mean grabbing the crispy bacon from your plate and replacing it with spongy blocks of tofu or taking jobs away from American farmers. This means producing the foods we know and love in modern, safe and sustainable ways."[2]  Tofu has been a pejorative cultural metonym for vegetarianism, a trope to ridicule animal advocates, vegetarians, and vegans.  Why, then, is  GFI perpetuating the trope?

In fact, it is difficult if not impossible to advertise the (supposed) aesthetic and health benefits of "clean" or lab-grown meat without at the same time reinforcing the dominant myths and lies of meat culture as a whole, while simultaneously deemphasizing or even denigrating plant-based foods.  That's because meat is not a thing, but an idea, even a web of related ideas.  That means that when you strengthen one strand of the web, you strengthen the whole web--the idea of meat as a whole.  As Van Kleeck continues:

"'[C]lean' meat actually promotes the culture of meat by continuing to promote 'meat' as a desideratum, a desired object--both as a foodstuff and as a concept. 'Meat' remains the flesh of an animal, and as long as that conceptualization of animals as meat remains...animals will die. As a result, what we find is that there's 'real' meat, there's 'clean' meat, and then there's all that somehow less appealing plant stuff. By propping up meat, 'clean' meat perpetuates the speciesist view that animals are meat and thus perpetuates violence.

It remains to be seen whether cellular meat will some day be able to compete in the marketplace with meat from slaughtered animals.  Already, however, we are seeing highly problematic marketing issuing from the emerging Clean Meat industry.  In many advertisements, the marketing for "clean" meat is almost indistinguishable from the marketing of so-called "high welfare" meat from animals raised on organic farms.  Paul Shapiro, the author of Clean Meat (now an entrepreneur helping the meat industry add plant-mater to their meat products), reinforces the idea of meat as an aesthetic ideal when he writes, of Hampton Creek's lab-synthesized foie gras:   “As I closed my eyes and let the fatty liver melt on my tongue, the...foie gras brought me an amount of pleasure I’ll confess I was a little embarrassed to admit."  Do such loving and evocative descriptions of meat make it less likely, or more, that the consumers of the future will seek out foie gras and other products from real, living animals, rather than from bio-vats?

The problem with depicting animal flesh as having a paramount aesthetic and even "existential" value, a value that so enhances human life that giving it up would surely amount to a hardship, is that it only makes it that much harder for vegans and animal advocates to shift consumers away from meat obtained by killing animals.  Ironically, it also may inject new energy into the global "animal protein" market, by making a commodity which only a short while ago was beginning to be associated with sickness, death, violence, and suffering, suddenly seem "fresh" and innovative and promising.  Meanwhile, the approach eclipses a crucial truth that vegetarians and vegans have known for centuries:  there is an endless variety of non-animal foods to savor and enjoy.

To this, the CM promoter might say, "No, that's not true!  Clean Meat only makes Clean Meat seem attractive."  But does it?  Justin Van Kleeck doesn't think so.  "I have no belief whatsoever," he says, "that cultured meat will reverse the trend of rising meat consumption globally, and my fear is that it will create a vicious circle that actually drives people to seek out 'real' animal flesh (as well as 'real' dairy and eggs, which both also feed into the culture and industry of flesh.)"

Clean Meat is nothing if not a series of missed opportunities to educate the public about the truth about animal agriculture, which is that no form of animal agriculture will ever be humane, just, or ecologically sustainable.  What is clear is that these opportunities are being intentionally missed.  Because over and over, we find Clean Meat proponents either lying by omission--not educating the public about the facts--or positively misleading or confusing the public    As Karen Davis observes:

"In addition to its reinforcing the idea that humans need, or have a 'right' to consume, meat, there’s reason to worry that, among other things, it would be hard to know for sure whether the meat being sold or served as 'clean meat' actually came from a cellular-meat factory or was derived from slaughtered animals. What would, say, a restaurant owner do if the supply of cellular meat dwindled or disappeared? Pretend to customers that a dead chicken breast was 'cellular,' rather than lose business? It’s quite likely that the corporate lie would not even be known by the restaurant owner. Egg producers have been known to put eggs from battery-caged hens into cartons of 'cage-free' eggs when the cage-free eggs were in short supply or simply to make more money. I would not be surprised to learn such practices happen a lot. 'Organic' isn’t always organic. Everyone reading this knows that animal farming is full of lies and is poorly, if at all, monitored by the USDA or 'Humane Certified' for 'truthfulness.'”

It's "Human Nature" To Eat Meat

Ezra Klein, in his Vox interview with Bruce Friedrich of the Good Food Institute, told his national audience:  "You often hear that eating animals is natural. And it is. But not the way we do it."  But Klein of course was simply wrong.  Eating meat is no more, or less, "natural" than studying for a chemistry final, rigging an election, bombing a foreign country, listening to Bach, or watching pornography.  Like these other activities, in other words, eating other animals is a cultural practice.  It isn't an immutable fact of nature.  Friedrich didn't correct his interviewer, because he agrees with him.  As he told a New York Times journalist:  "'We need to change the meat, because we aren’t going to change human nature.'"

Ironically, given its high-tech veneer, the Clean Meat lobby is in fact "naturalizing" meat, reinforcing the public's sense that eating flesh is simply part of our nature, and therefore something we must have.  As Karen Davis observes, this message is fundamentally anti-vegan:  "The human desire for meat is being portrayed as the right of an implacable human 'nature,' compared to which animals and ethics and vegan activism are inconsequential, even silly."

It is past time for advocates for animal justice to ask themselves whether an emergent for-profit industry that reinforces social myths--lies--about meat, telling the public that animal flesh is natural, nutritious, delicious, sustainable, and an irreplaceable foodstuff and even an indispensable component of human happiness, is really going to help us wean the American public off meat from living animals.  The goal of animal liberation is not merely to replace one consumer item with another, but to transform the whole of our troubled relationship with other beings.  As Dinesh Wadiwel observes:

"At the heart of the animal liberation project is the desire for an end to violence against animals. This demands a world that is radically re-imagined, and attacks directly the problem of mass utilization of animals for human pleasures.  This radical demand asks for a world without the production of suffering and death attendant to animal agriculture, and with this, cultivates our imagination for meaningful lives that are lived without the consumption of animal products. 'Clean meat' threatens to replace this radical demand with an impoverished desire:  instead of focusing on ending animal agriculture’s production of death and suffering, we are presented with the goal of finding a 'better meat'. This not only leaves the desire for meat unchecked, but displaces attention away from the radical demand of shutting down industrial animal agriculture."