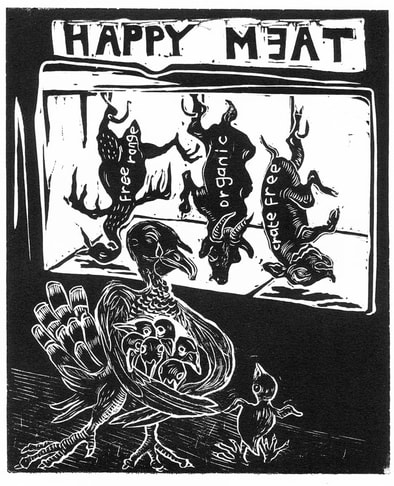 Sue Coe: Happy Meat. 2015. Copyright ©2015 Sue Coe Courtesy Galerie St. Etienne, New York.
It is the stated goal of the Good Food Institute, as well as of the entrepreneurs running the Clean Meat start-ups themselves, to produce synthetic flesh without directly harming animals in any way.  However, the Clean Meat lobby is already harming animals--by promoting the myth of "humane" animal agriculture.  It is important that people who care about animals understand that whether Clean Meat eventually does replace factory farming or not, it is no part of the Clean Meat lobby's strategy to challenge the mass killing, degradation, and suffering of animals in small-scale, organic, and so-called "high-welfare" animal farming operations.

Here is what Bruce Friedrich, the main promoter of Clean Meat, has said on this subject (in a public discussion at Stanford University):

"I understand the concern of people in Slow Food, and we're absolutely not trying to make people unhappy about, you know, [animal] farms....I would be completely shocked if the fact that clean meat is being promoted by talking about its advantages, if that had any negative ramifications for the folks in the regenerative [animal] agriculture, Slow Food, high-welfare crowd.  And in fact, to the degree that Clean Meat is successful, and creates competition with conventional animal agriculture, what I see in the future is, ... it replaces conventional animal agriculture--we see Tysons, and Smithfield and everybody else go to Clean Meat, and then the options are that [cell meat], and the sort-of regenerative, high-welfare meat.  So, I don't see them in competition at all...I don't think there are any real negative ramifications for high-welfare, regenerative agriculture."

Here, Friedrich effectively reduces the future to two options for consumers:  either they will buy "high-welfare" meat from animals slaughtered in small operations, or they will buy Clean Meat from the companies Friedrich has helped seed through his two venture capital firms.  In fact, however, there is a third option which Friedrich does not mention at all--veganism or a plant-based diet.  As Ezra Klein, in his interview with Friedrich, put it:  "[Bruce Friedrich's] work puts him at the hot center of one of the most exciting and important technological stories of our age: the possible replacement of a cruel, environmentally unsustainable form of food production with a system that’s better... for the planet, better for animals, better for our health, and better for our souls."  In other words, the choice is between the "old" conventional meat, or the new Clean Meat ("a system that's better").  No mention is made of the fact that plant-based diets are more ecologically sustainable, healthier, and more ethical.

Proponents of Clean Meat thus give a "pass" to the killing of literally tens of millions of animals, under the guise of "welfare." Indeed, he seems to be saying that the Clean Meat strategy is intended to preserve so-called "humane" animal agriculture--in other words, that it's a package deal.   But does it matter that Clean Meat advocates are actively promoting the myth of "humane animal" agriculture?  Isn't the real problem factory farming?  Unfortunately, it does matter, and no, the problem for animal justice is not factory farming but animal agriculture as such.

Although so-called "high-welfare" animal agriculture accounts for perhaps only 2-3% of total American meat consumption, it constitutes the fastest growing market in the animal industry, yielding over a billion dollars in sales each year.  Moreover, though so-called humane products represent only a small percentage of total sales of animal products, they exert an outsized semiotic influence on the discourse of animal agriculture as a whole, shoring up and legitimating human domination over animals, human violence against animals.  Readers not already familiar with the "humane myth"--the idea that animals can be sexually reproduced, raised, and killed en masse in a way that is "ethical" are and why it is so damaging to the interests of animals, can learn about it at these online sites, among many others:

Unfortunately, the "humane meat" myth is strengthening the meat economy as a whole, including even so-called conventional animal agriculture or factory farming, too.  Though so-called "high welfare" farms represent only a small percentage of all animal agriculture, the discourse appeals especially to middle- and upper-class consumers (the Whole Foods set) who tend to be better educated and who have outsized influence over the wider economy and society.  (Many journalists, filmmakers, and policymakers are members of this group.) Thus, by selling the public on the twin notions (1) that animal meat is a commodity we should not and even cannot live without, and (2) that killing animals for food is acceptable and even "ethical," the Clean Meat lobby is helping to reinforce the humane myth and to undermine the long-term interests of the animal advocacy movement.  Which seeks not merely to reduce the overall numbers of animals being killed, but to put an end to mass slaughter altogether.