Snatching Defeat from the Jaws of (Possible) Victory 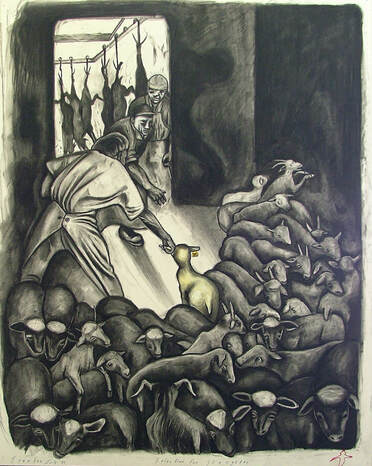 Copyright ©1991, Sue Coe. Courtesy Galerie St. Etienne, New York.
There is a pervasive sense within the animal advocacy movement that past strategies have failed, and that we need to try new approaches if we are to crack the code of the meat economy.  Global meat consumption has been rising sharply in recent years, not declining--and the total number of animals being killed has risen too.

Given this disturbing trajectory, animal advocates eager for good news have understandably jumped on the Clean Meat bandwagon, in the hopes that mass marketed synthesized animal flesh will soon push aside animal products produced in animal agriculture.  Clean Meat is being seen by many in the movement even as a "Hail Mary" pass--a miraculous technology that will finally achieve what decades of courageous activism have failed to achieve--the end of animal agriculture.  If the public won't give up eating animal flesh, the thinking goes, then let's give them flesh without the violence. If you can't beat 'em, join 'em.

Paradoxically, while vegetarians and vegans are the least likely, as a demographic group, to want to actually eat cell-cultured or Clean Meat (CM), they are also the most enthusiastic about seeing CM come to market.[1]  While their enthusiasm is understandable, however, it is tragically misplaced.

The irony of the Clean Meat lobby is that it has chosen to belittle veganism and animal advocacy at a time of growing public interest in plant-based foods.  Between 2014 and 2017, the number of Americans identifying themselves as vegan grew sixfold, from 1% to 6% of the population.  Between 2017 and the middle of 2018, meanwhile, the sale of vegan food items grew 20 percent in the US.  According to Global Data, "A full 70% of the world population reportedly is either reducing meat consumption or leaving meat off the table altogether."  Interest in plant-based foods is especially prevalent among millennials.  These are hopeful signs.

Why then is the Clean Meat lobby de-emphasizing animal advocacy, distancing itself from moral critique of speciesism, and aggressively promoting lab-grown animal flesh, rather than plant-based foods?   The timing of the cellular meat movement also could not come at a worse time--just as plant-based alternatives have crossed a critical threshold of verisimilitude, vis-a-vis animal meats.  As reported in a recent article in the Guardian, Eric Bohl, the director of public affairs at the Missouri Farm Bureau, warned:  “If farmers and ranchers think we can mock and dismiss these products as a passing fad, we’re kidding ourselves....This is not just another disgusting tofu burger that only a dedicated hippie could convince himself to eat....If I didn’t know what I was eating, I would have no idea it was not beef....Farmers and ranchers need to take notice and get ready to compete. I’ve tasted it with my own mouth, and this fake meat is ready for prime time.”

As Vasile Stanescu rightly observes:  "One of the reasons we so clearly do not need (and should not support) in vitro meat is because people already cannot tell the difference between products such as Burger King's new Impossible Burger and conventional meat in a blind taste test.  What 'problem' then is in vitro meat trying to solve? Actual vegan options already provide every single benefit in vitro meat offers (including taste) plus these options are actually scalable and sustainable.  In fact, I think part of the very reason in vitro is being developed is to try and "ward off" the growing appeal of actual vegan options (i.e. 'to keep people eating meat').  In other words, 'clean' meat is akin to 'clean' coal:  a supposed techno-fix utilized to ward off the appeal of actually valid and sustainable options.

The Clean Meat lobby has thus set up a false dilemma, suggesting that consumers in the future will have to choose either between Clean Meat, on the one hand, or meat from animals raised on "high-welfare" farms, on the other.  In fact, there of course is a superior alternative to factory-farmed flesh available already, one moreover that is more ecologically sustainable, healthier, more delicious, and more ethical--namely, plant-based foods.  Now that animal agriculture is bumping up against the natural limits of the living earth, destroying biodiversity and contributing hugely to global warming, this is in fact the perfect time, strategically, for animal advocates to join with fellow activists in the environmental and climate change movements to push for the complete abolition of animal agriculture.

We are at a turning point in history when we might at last take critical stock of our ruthless war against all the beings of the earth, and simply walk away from it.  But this opportunity is being stolen from us by the untimely Clean Meat lobby, which is trying to engineer an end-run around animal rights.  In doing so, they may be thwarting the possibility of a genuine transformation of the human character.

Meanwhile, the cellular meat lobby continues to sell a pie-in-the-sky fantasy.  According to Joe Fassler, when the Open Philanthropy Institute, one of the Good Food Institute's major donors, did a study of the technical feasibility of manufacturing cheap cellular meats, the organization "concluded [that] cell-cultured meat will likely never be a cost-competitive food."  Fassler continued:  "David Humbird, the UC Berkeley-trained chemical engineer who spent over two years researching the report, found that the cell-culture process will be plagued by extreme, intractable technical challenges at food scale."


[1]
"In a 2017 study published in Public Library of Science, nearly two-thirds of people surveyed were willing to try clean meat, but only one in three was willing to eat it regularly as a replacement for conventional meat." from the study:  "Vegetarians and vegans were more likely to perceive benefits compared to farmed meat, but they were less likely to want to try it than meat eaters. The main concerns were an anticipated high price, limited taste and appeal and a concern that the product was unnatural. It is concluded that people in the USA are likely to try in vitro meat, but few believed that it would replace farmed meat in their diet."  "These results demonstrate an apparent paradox: those who are already meat restrictive appear less willing to engage with IVM....."  https://journals.plos.org/plosone/article?id=10.1371/journal.pone.0171904